This tutorial assumes you have a working knowledge of Docker and Python.

E911 JSON to CSV is a GUI (Graphical User Interface) application which allows you to download all E911 records from your account and write them to a CSV file. With the release of Flowroute's E911 API, you are now able to programmatically validate and add E911 addresses to your account. This app queries the API for all of the E911 addresses associated with your account, then gives you the option to write the records to a CSV file for data processing. We hope this app takes care of the error-prone issue of copying data from one format and pasting it into another.

This E911 JSON to CSV app runs on Python 2.7 and leverages the classic Tkinter module for the GUI that you will be interacting with. It has been tested on Ubuntu 16.04 and macOS High Sierra 10.13.4.

Tkinter is Python's de-facto standard GUI package, yet I have only heard of it yesterday. I like the simplicity and I can see why it continues to be supported and is considered a minor tradition of the Python world. To systematically check for Tkinter support on your machine, see Checking your Tkinter support on the Python wiki Tkinter page. If you encounter a module or package not found error, refer to Installing Packages in the Python Packaging User Guide to learn more about different ways to install Python packages.

With all installation requirements out of the way, simply run the following:

This should pop up a small window which will require your Flowroute API Access Key or username, Secret Key or password, and Output File or path to write your CSV file to. Since I'm lazy, I ran the following optional step:

To learn more about setting environment variables, see How To Read and Set Environmental and Shell Variables. In a pinch, you can create an fr_env.sh file in the same directory and add the following lines:

Source the file as follows:

Then run json2csv.py as shown above. With your credentials auto-populated like shown in the screenshot below, click Write CSV to write the file to the path that you specified. 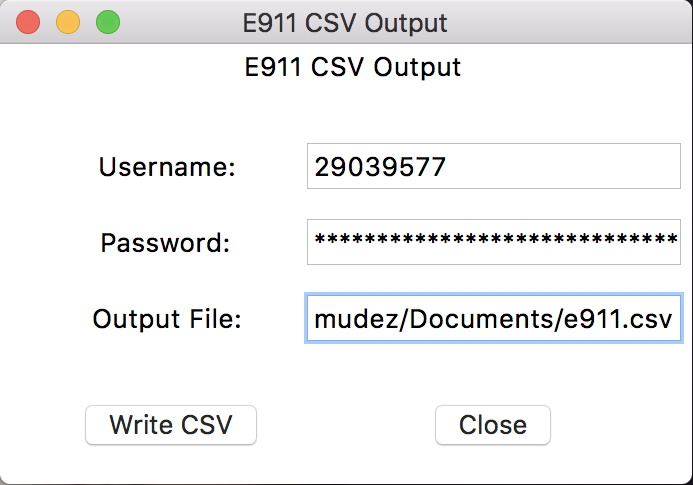 To review the CSV file that has been downloaded to the path that you specified, open the file. That's it! Start doing your data magic.

Run the app with Docker

When running this app using Docker, you will have to install XQuartz. Of course, if you haven't downloaded Docker on your machine yet, see About Docker CE.

Turn on X11 Forwarding and allow connections from network clients

Make sure the remote ssh server supports X11. Add the following line to the etc/ssh/sshd_config file.

Xquartz provides a telnet app which automatically has the DISPLAY variable already set. If you are using iTerm2 like me , you will have to manually declare the variable.

To confirm, run the following:

The xhost program is used to add and delete host names or user names to the list allowed to make connections to the X server. Read more about it here.

For this demo, you can use your machine's IP as your hostname.

Once you're logged in, switch to the directory that contains your Dockerfile. In this case, it will be the local path for this repo:

Build your Docker image to install the app dependencies. Make a note of the resulting image ID.

Run the Docker container, passing along the environment variables and sharing the volumes.

For an explanation on docker run arguments, see the reference page.

This should bring up the XQuartz window with the fields auto-populated. If you read through this entire thing, again, write your CSV file and do your data magic!